Figures Of The Earth 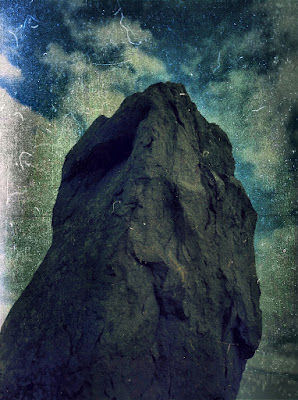 Even though he knew of the horrors that awaited him in the dead fields and the grave of Waddes beyond, Godwitsun pushed on scrambling through the ancient gnarled bosk.

He glimpsed the uncanny structure through the thicket and felt a deep, keening dread wash over him. The villagers had warned of the stone and it's preternatural powers, but the elders had tasked him, he had no choice, because to become outcast would mean certain death.


The village Binder had helped Godwitsun providing him with the Cord, which had already begun snaking it's way through his limbs and trunk and was now spreading it's tendrils throughout his skull. The elders had imparted to him the knowledge necessary for the journey ahead.


Now stood before the great monolith Godwitsun felt it's immense power draw him forth. 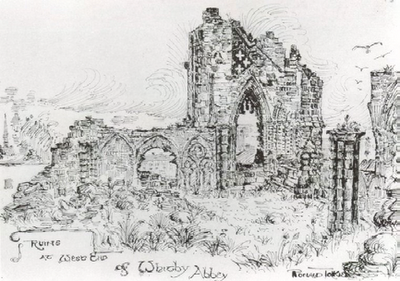 This sketch called 'Ruins At The West End Of Whitby Abbey' was drawn by the 18 year old student JRR Tolkien when
he visited the town in 1910. 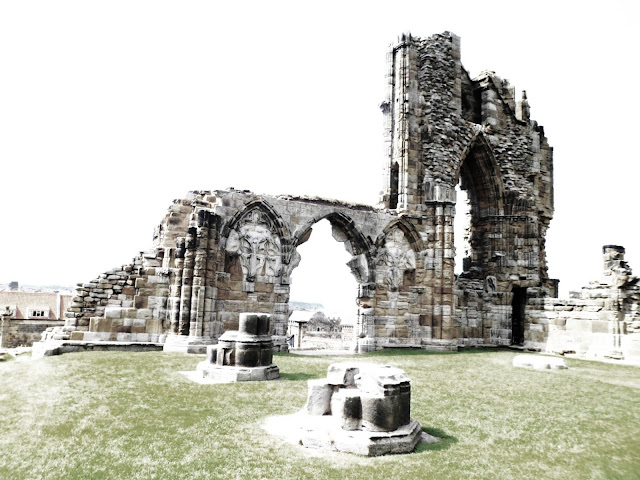 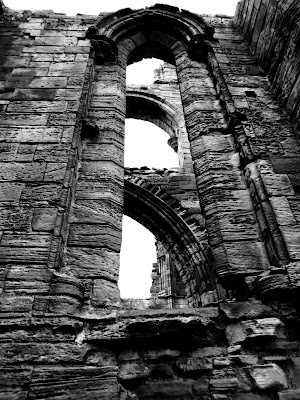 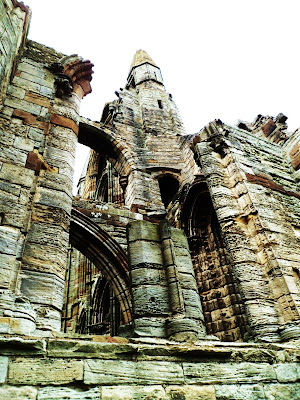 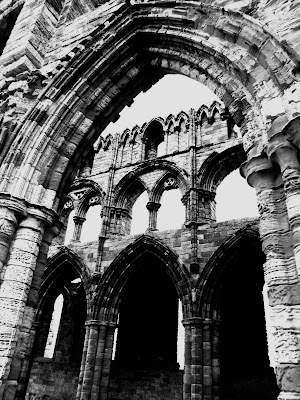 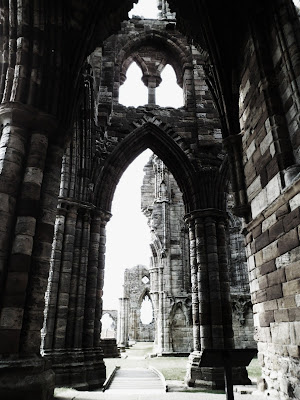 The backbone of the radar provision surrounding the UK in the Second World War was the Chain Home System. Two main types of Chain Home System were built - AMES Type 1 (Air Ministry Experimental Station) and AMES Type 2 or the Chain Low System. Royal Air Force Danby Beacon Chain Home Station (AMES Type 1) was located high up on the North Yorkshire moors and was one of twenty built along the eastern coastline. The system was based on the pattern of the experimental establishment set up at Bawdsey in 1936, and in its final form it consisted of equipment housed in protected buildings with transmitter aerials suspended from 107 metre steel towers and receiver aerials mounted on 73 metre timber towers. The system at Danby Beacon was provided with buried reserve equipment which consisted of underground transmitter and receiver block, now only the buried reserves of the transmitter and receiver survive. The station was technically restored in the early 1950s as part of the Rotor programme. In all it comprised three components: the technical site, a domestic site for personnel equipment, and a stand-by set house.
English Heritage. 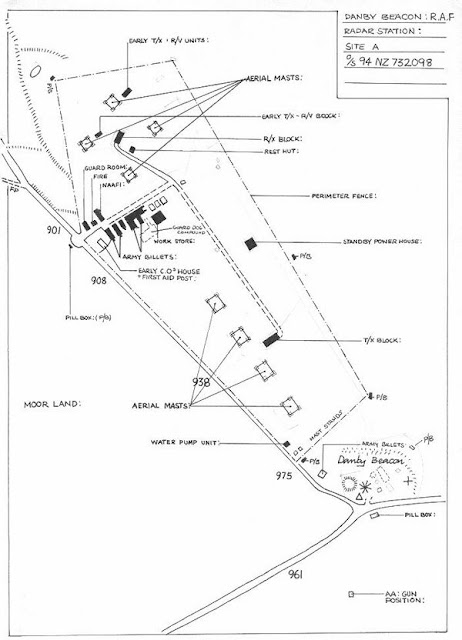 Now covered over by years of moorland vegetation the remains of the defunct Chain Home System Radar Station on Danby Low Moor seems to sit comfortable within the moor's Neolithic surroundings. The three low mounds - R/X Block, Standby Power House and T/X Block - which stretch across the open land have long since taken on the appearance of the many tumuli and howes that litter the immediate area.

On closer inspection of the site it becomes evident the it’s decommissioning in 1957 may well have been completed with very little ceremony, the smashed up shards of concrete and the twists re-enforcement bars bare witness to the station's seemingly abrupt demise.

It is interesting to note that the radar station is situated almost on top of the Danby Beacon a much more ancient early warning system.This earlier beacon was just one part of a system of beacon lights that were situated at specific points along the whole coastline. Throughout the centuries they would have been used to quickly alert the entire region of any impending invasions from the numerous enemies England had accumulated over ages. The modern beacon - seen in the photographs below - was erected in 2008, but it is thought that a beacon may have existed on this site since at least the 1600's - although it has to be said that when you stand surrounded by this ancient man made landscape it is easy to believe that the place has possibly been a site of  major importance throughout history. 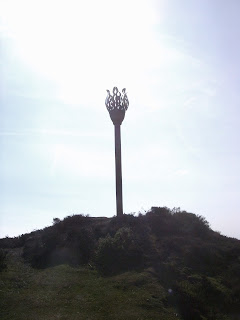 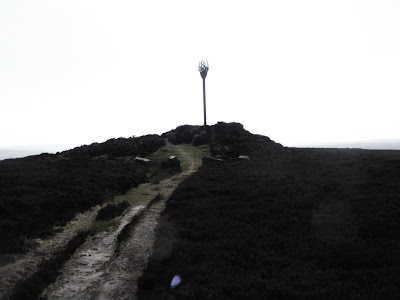 Found in Whitby's upper harbour this ancient ford traverses the river Esk from the east side of town at Spital Bridge to the west at Bog Hall. Believed to date back to at least the Roman period the ford is by far the oldest surviving means of crossing the river. Although now in a state of disrepair it would still be possible, with an extremely low tide and steady footing, to cross from one side of the town to the other. 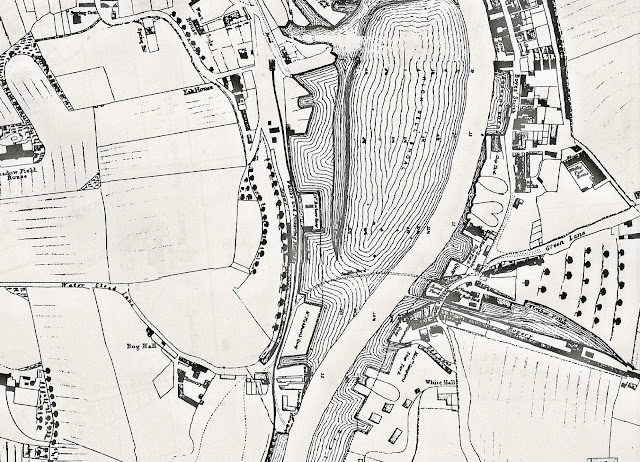 In this detail of the Upper Harbour (taken from a map by Francis Pickernell dated 1841) the ford can be seen stretching from one side of the town to the other. 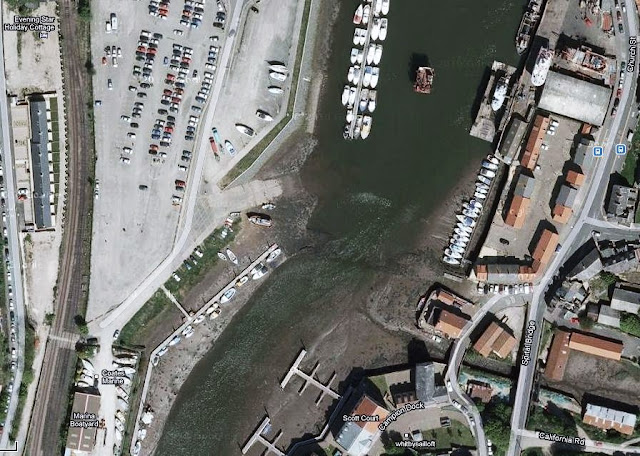 This modern image of the upper harbour shows quite clearly the ford as it appears today. 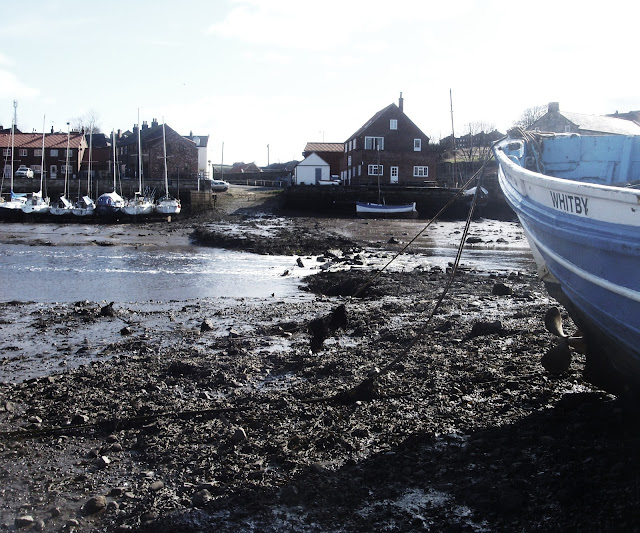 The ford from the West (Bog Hall) 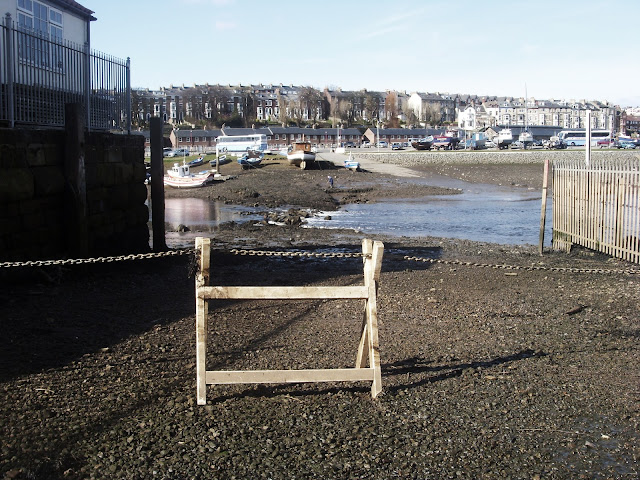 The ford from the East (Spital Bridge) 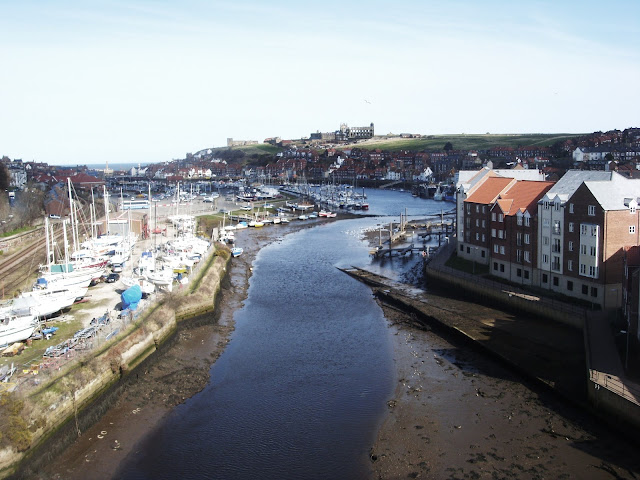 This view is from the high level bridge looking down into the harbour, the ford can be seen in the middle distance.

Follow the link below to Chris Whitehead's Taphonomy Blog and his field recordings of the ford.
http://sonotaphonomy.blogspot.co.uk/2012/07/esk-rainwater.html
Posted by Richard at 10:31 No comments:

View From The Back Garden 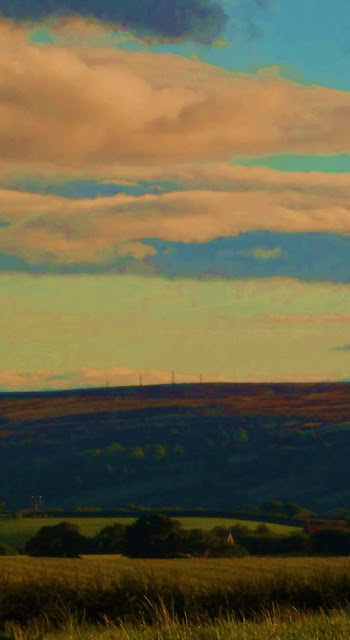 Hill Of Skulls
Posted by Richard at 08:15 No comments: 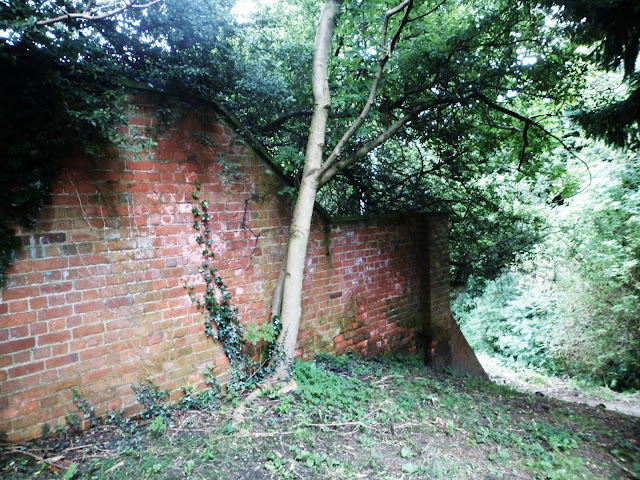 This large red brick wall that is situated on the outskirts of town is all that remains of one of the many market
gardens that were found in and around the district. Once owned by a couple called Waller it was eventually sold off and built
on by a local housing association.


As youngsters my friends and I would run wild through the disused gardens and derelict house that stood in the
middle of the land, in - what seemed at the time - to be a terrifying game of cat and mouse with the imagined
spectre of  'Waller' the garden‘s owner.

It wasn’t until recently when I decided to explore the area surrounding the wall that I found out about it's secret history. Talking to a local resident of forty years I was told that a couple called Waller (I always thought the name had been a our own childhood design - ‘lets play in Waller’s wall’ was our call to arms), had run the market garden for the large, private estate in the vicinity called Lady Harrowings, (as a point of interest  it appears that there never was a Lady Harrowing and the name was just a product  of the local population’s caustic sense of humour). The couple had lived in the house within the garden walls evidently without gas, electric or running water and I was told that the old lady would have to leave the seclusion of the garden to visit a friend in a near by council house to bathe. 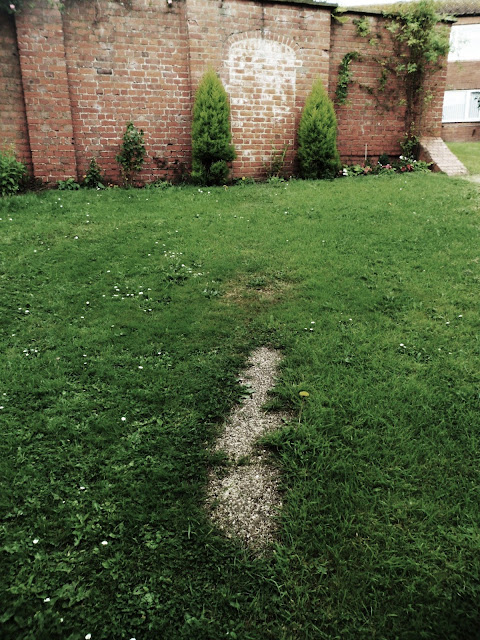 In the above picture you can see what was the entrance to the garden as used by the couple,
blocked up for over twenty years the footpath amazingly is still evident - in fact it had just been
re-seeded that very morning, as it had on a number of occasions with no apparent effect.

After the estate was eventually sold the garden became ever more neglected by the elderly couple and following
the death of his wife the husband (who lived into his nineties) was forced to leave the house and garden through an
extortionate rent increase by the local council. 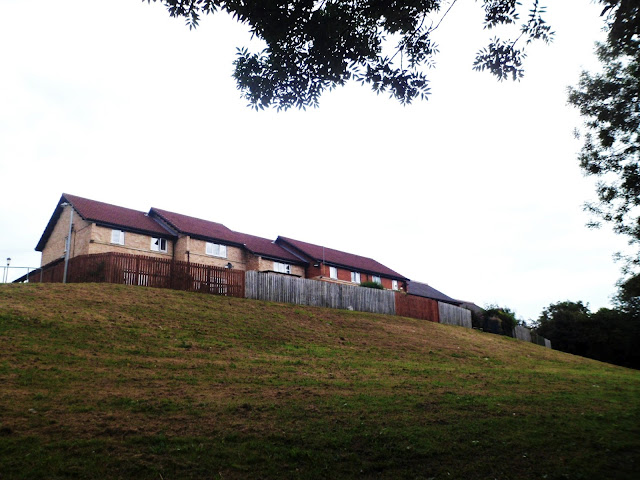 Having freed up the land the council went on to sell it for a considerable profit to a housing association, who then
built a small housing estate Dundas Gardens on it in the early 1990’s.

Mystery On The Moor 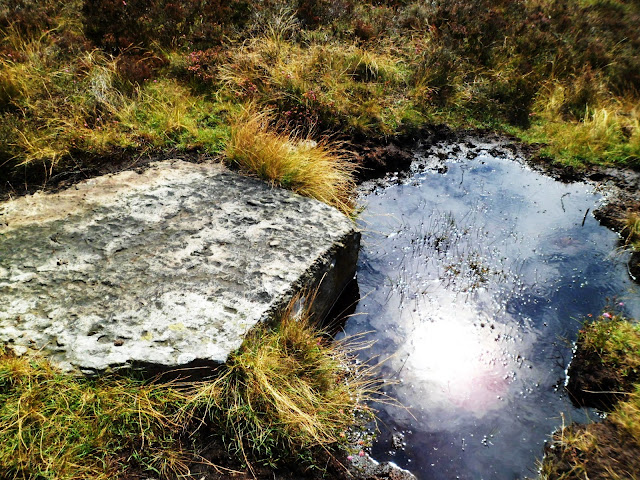 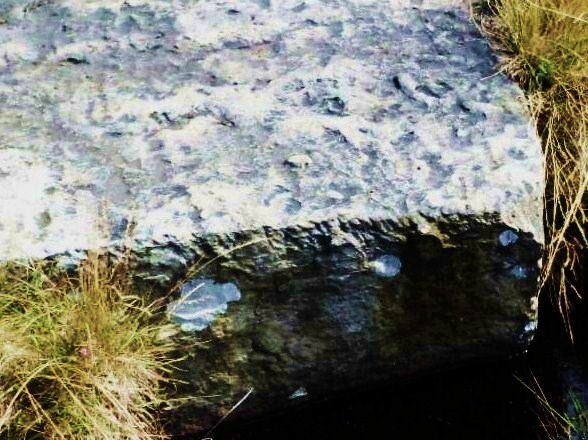 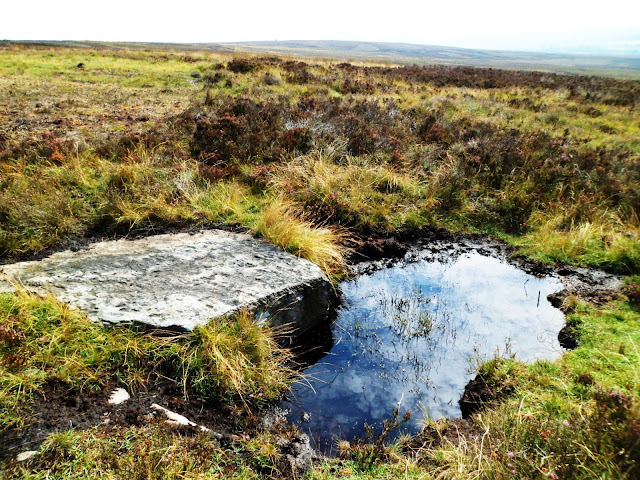 I have absolutely no idea if this stone that I stumbled upon on a recent wander across the moor top is naturally occurring,
or has been manufactured by human hands. But it’s position - laying flat and level -  and the fact that it seems to
have distinctive edges, angles and planes, seems to suggest that it has been placed there.